A downloadable game for Windows

TALES FROM THE OUTER ZONE:

A cyberpunk tale of marriage and selfdestruction.

"Now that's how you draw a cyberpunk dystopia" - PC GAMER

You're a cyborg and your wife has left you. To find her you must leave "The Structure" - a dystopian city in which you are imprisoned. The only way of escaping The Structure is to rid yourself of your implants and become a plain-skin.

This short point-and-click adventure was made in three weeks for MAGS August 2018.

The art! The music! This is amazing!! Loved the cyberpunk atmosphere. Glad to know that you have created more.

Hi ! Even better than "Fleshworms". It's a challenge to make a great game with very little but essential elements... And you did it !

Thanks! Yeah, this was my first game. Also my favorite. Im happy you liked it!

Wait the Cyberpunk used us to plant a bomb in the tower haha.

Great style and a great starter for a great 'series' :)

It's amazing how you managed to create a vivid setting with just two maps. Really enjoyed the experience!

Oh thank  you :) I'm happy you liked it. The next game in line has 4 maps, but then I went back to 2 again for the third. Or actually its sort of only 1 room :)

Very cool concept! The art and sound design were stunning.

Awesome game! I'm already downloading the two other tales and it's great to know that you're working on a game in the same universe! :D

The artstyle of this game is really unique ! Loved It !

Thanks a lot :) And thank you for playing!

Great pixel art. I love cyberpunk so I loved this game. Well done and I can't wait to play more of your games in the future

I'm happy you liked it :) There are three chapters in the series so far (second is The Goat Crone). I hope to make many more, but right now I am working on a bigger game set in the same universe.

Probably the best TALE FROM THE OUTER ZONE. Great work, as always!

Thanks a lot :) I hope to make many more chapters. Right now I am working on a bigger project in the same world.

Hi! I'm trying to play this game on Linux (Pop!OS 20.04). It doesn't start at all through the itch app, only when I start ags64 directly. I had to move the TOZ_IDENT.ogv file into the data folder go get the intro to play. However, I have no sound. How can I fix this?

Hi. Thank you for your message. To be honest, I haven't tested it on Linux, and I don't have a Linux fix. Sorry! I thought it ran without problems. I'm sad to hear that it does not. I have removed "executable for Linux" now. Hope you will be able to play it via Windows some day.

I loved it! I have a thing for cyberpunk so this one is absolutely my favourite tale of the series so far. Looking forward to the next episode!

Thank you :) I also want to return to The Structure in another episode. My next game Mind Scanners (psychiatry sim) will also be set in the cyberpunk metropolis.

I really love this game, the story and the characters are so loveable while the art keeps you engaged all the time!

A great point and click adventure that has a strong premise and story from the start. I really enjoyed the time that's been given to developing the story from the get-go and telling itself very quickly in a short time-frame. My main gripe however is the near pixel precise selecting that's needed for some puzzles that effectively and without need 'hides' some of the activation points.

thank you for your kind words :) sometimes a story works best if you only have a day to write it. Yeah there is some pixel hunting going on (mirror?)

The mirror definitely is one as it really doesn't give any clues that it is in fact selectable. Another is the slot for the terminal and the pipes. With the pipes the puzzle is given to you, but it's quite a specific location. All three fall prey to the point and click troupe of trying to not make the puzzle obvious, but at the same time not giving any clues. For example, with the mirror, perhaps it could have had a crack in it, or been at a slight angle, just to signify it's 'different'. By putting it where it is, on a selectable item, it makes it seem like there's nothing else there to select, if you understand my view.

my playing order is from fleshworm to goat crone to this, and it actually  make more sense tho

Really enjoyed the construction of the puzzles, not too hard or easy in my opinion, and I really liked how all the requirements layered over each other! Love the art style too, all in all very satisfying to play through.

Thanks a lot Politure :) I'm planning on doing a lot of episodes in this series. The second episode is already out - called "The Goat Crone".

i really liked this, it was sad tho. any plants for a sequel to this story?

There is already a sequel entitled "The Goat Crone" -  https://theouterzone.itch.io/the-goat-crone

I plan to make more once I have the time.

This game's a neat little work of love. Having to "regain your humanity" so to speak, to even have a chance at regaining your lost love is a fine notion. Visuals-wise, was Katsuiro Otomo's Metropolis a source of inspiration? I'm kinda getting a similar vibe.

At any rate and on drier matters, I had some trouble running on Linux. The Itch client fails to launch (here's the error trace); it looks like it might be having trouble reading $SCRIPTPATH as defined in Linux/CyborgSeppuku? But it is defined and called correctly with quotes, it is a single string with whitespace in it. Also ags64 is exactly where it's looking for it, no idea why it can't find it. But tbh I'm not really sure how that script works, since all it supposedly does is define a couple env variables but if you run it by hand it executes AGS and the game somehow (and completely scrambles your randr configuration if launched fullscreen as by default, but details). Might be the problem is just with the Itch client.

Thanks for your kind words :)

Otomo was not a direct influence, but I've seen his films so perhaps my subconscience played a little trick :)

As for the Linux problem, I'll ask the AGS forums. I'm not the best coder nor do I know Linux. Thanks for the feedback!

Thanks a lot man! I love the Meat Loaf take on this :D

Our hero literally did everything for love. Meatloaf was bested. :) 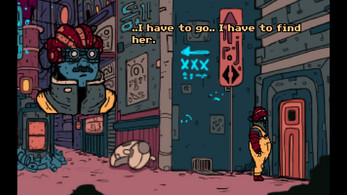 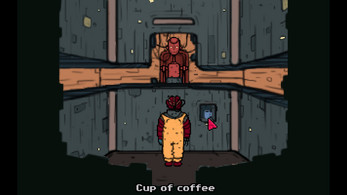 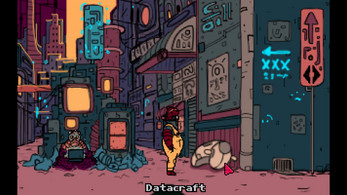